The Fork-tailed Flycatcher is supposed to be in Argentina right now. Southern Mexico is the NORTHERN edge of its “normal” range. However, once in awhile this spectacular flyer…its forked tail is almost a foot long..wanders off course – 3,000 miles! Ornithologists theorize that some individuals’ internal clocks are spun around 180 degrees and thus migrate north, as opposed to south.

Considered a “code 3” (i.e. a couple sightings per year in North America) by the American Birding Association, the rare bird alert reported an adult male frequenting the Connecticut River’s Hamlyme ferry slip. Apparently content on devouring plentiful berries and lingering insects, it had been hanging around all week. This was Connecticut’s second forky in three years.

I had planned on chasing the code 5 (I have never seen a code 5 rarity!) Amazon Kingfisher in Harlingen, Texas this weekend. But a lack of reliable sightings this week combined with ridiculously cold and wet weather forecast for southern Texas, produced a brief moment of sanity….I post-poned Texas and headed to Connecticut. 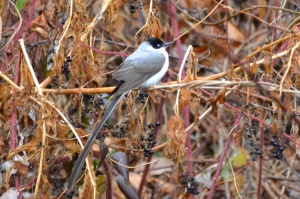