A weekend visit to see our friends Deborah & Dennis Glass in Palm Beach produced unexpected Lifer #694. Do you like how I casually dropped “Palm Beach”…I could get used to this! The Nanday Parakeet isn’t super rare in Florida….it is an established South American escapee. The surprise was that I only recently learned that the ABA (the birding governing body) added this spectacular parakeet to the “countable” list.

Now it wasn’t a lay-up. First I felt I needed permission from my hosts and Nina to disappear only a few hours after I arrived. Truth is, they know me well enough and urged me out the door. Then I needed to search E-bird and query if this bird has been seen and reported near here recently. The last post was March 2…..thirty miles away. Not terrible odds. But not good enough to bother bringing my digital camera! I left before dawn and five hours later, after much driving with all of the windows down (you are more likely to hear these squawkers before seeing them), I was ready to return home and bask in 80F poolside.

But my sixth sense (birders have this) told me to try the Loxahatchee National Wildlife Refuge one more time. Three hundred yards before the entrance I noticed two large birds on the telephone wires just ahead. My heart jumped, I steered my rental into a ditch, barely remembered to throw the gear into park; it wouldn’t have mattered anyway as I was nosed up against a hill…and quickly snapped one photo with my I-Phone…before they flew off. 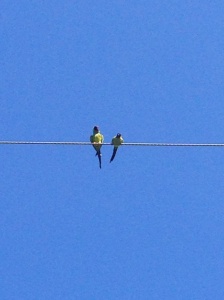 I made it home in time for lunch and a celebratory beer! Life is good.