The White-cheeked Pintail is a Caribbean lake-dwelling duck that every once in awhile makes an appearance in Southern Florida. The Lely Resort in Naples has been the home of this presumed wild (this species is also a popular pet) vagrant for a couple of weeks. Luckily for me, our MLK weekend plans placed me close enough to chase this beauty.

But this particular bird was reported to spend most of its diurnal hours asleep on an isolated shore of the resort’s golf course, hiding its diagnostic facial markings by tucking its head into its body. Finding the bird was one challenge but obtaining an identifying photograph (no, I didn’t have my telephoto lens) was unlikely. And the alligators…. 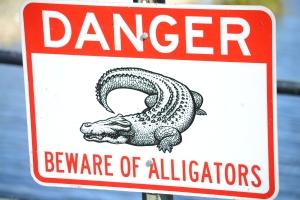 Thankfully, a friendly fellow with a tripod and scope was visible the moment I turned off I-41 and entered Lely Resort. He tipped me off to the bird’s location before I could state my name and impress him that I actually lived in Philly. Spotting the camouflaged specialty on the shore wasn’t a problem because four other bird enthusiasts were already present viewing the distant Pintail. It was on the rocks in front of the snack bar/rest room, a small building perched on a hill between the 9th green and 10th tee. But positively identifying THIS seemingly headless mass of brown feathers was impossible. I needed a closer look.

I waited until the others departed and made my way around the meandering shoreline and approached the snack bar area from behind. My plan was to sneak up on the bird from the side slope of the hill and hopefully snap a photo once it reared its head. I was fully aware that I was flirting with violating the birders’ code of ethics. I looked back to make sure nobody saw me but darn….three more birders had taken a position on the far shore and surely had me in their scopes along with the as-of-yet undisturbed duck.

I returned to the far shore and greeted the three scopers with an overly enthusiastic: “I had to use the restroom. There was a maintenance man between the bird and me. I wasn’t as close as you probably thought. Truncated view, you know”, before they could chastise me. I don’t think they bought it.

Anyway, without exchanging pleasantries, they finally left. I repeated my meander. Nobody in sight. No guilt. Lifer #785…..provided the authorities deem this a wild bird.