The first sighting of an Amazon Kingfisher in North America occured in 2010 in Laredo, Texas. A second one appeared a couple of years ago nearby and now a third (female) has been frequenting the Rio Grande this Winter near Laredo. This bird has earned its “code 5” (i.e. very rare) status. You may recall that Code 6’s are extinct!

It has been ten months since I added a new bird to my North American life-list, so chasing this special beauty over MLK Holiday weekend was the perfect antidote for my nature-deficit syndrome. Only nine hours spanned waking up in Manayunk and joining a fellow (who drove all night from Wyoming) bird enthusiast on the banks of the Rio Grande.

The bird was stationed exactly where the rare bird reports indicated. The problem was….. it was comfortably positioned on the Mexico side of the river and birds spotted in Mexico cannot count towards one’s North American list.

Amazon Kingfisher is technically in Mexico 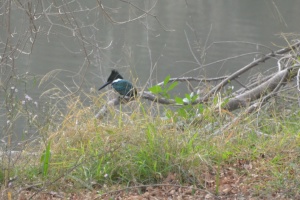 Silly, I know…but the brag card among most birders is one’s North American life list. Of course, it was a new bird for my WORLD list and that number should be the true benchmark for who really rates in the birding-world-pecking-order.

Anyway, birders are an honest bunch and we follow the rules of the game. So we waited. A couple of hours. Just talking and sharing highlights of our birding obsession…all the while watching the kingfisher nab little fish from the two perches in the photographs. Why would this bird emigrate to the USA when the fishing was so productive in Mexico?

Thankfully the answer was a pesky Green Kingfisher. It startled its much bigger cousin and both flew over to our side and perched on a piling. Now I could count the Amazon – #710 – and contemplate my next move.

Amazon Kingfisher officially in the USA

Well, I am writing this blog from my Super 8 hotel room in Willcox, Arizona. A long but satisfying day. Philly to Dallas to Laredo to Dallas to Tucson to here. Thank you frequent flier miles. Currently southern Arizona is hosting three species that I’ve never seen. Stay tuned…..