NOT just any Oriole and Robin

Birding Arizona is always a treat but the winter season tends to bring certain rarities to the region. For several weeks I had read about a Streak-Backed Oriole (code 4) regularly appearing at a remote homestead’s orange slice feeders on the AZ/NM border. Despite its supposed “reliability”, there is always a chance of missing any bird. But this immature male was very cooperative even with a Javelina underneath it! 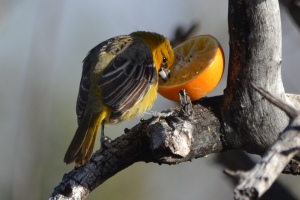 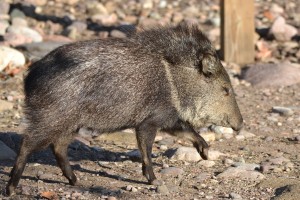 The owner of this property takes care of the birds and travel-weary birders as evidenced by the numerous feeders and neatly arranged lawn chairs. Other gorgeous species which deserved digital zoom attention include the Pyrrhuloxia, Gambel’s Quail, Black-throated Sparrow and Woodhouse’s Scrub-Jay (a recent split from the “Western Scrub-Jay” and while not rare…a new bird species for the life list!). 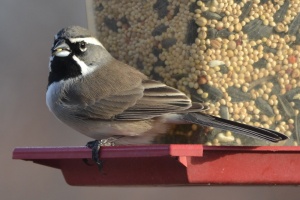 The Rufous-Backed Robin (code 3) is another Mexican thrush which typically appears in Southern Arizona in January. Two of these were recently reported…both a couple of hours away from where I was but in somewhat different directions. I chose the western location (Rio Rico). Upon arrival I met a Dallas birder who claimed this secretive, non-vocal visitor was not being consistently seen in any particular area of “the spot”. Bad choice. With three hours of light and two hours to drive north of Tucson, I decided to pursue the Rufous-Backed Robin which apparently likes pomegranates. Set back on private property, the deciduous fruit-bearing shrub was easy to see…with a telescope. But the birding Gods once again rewarded me. A blurry 500M telephoto shot but no doubt this is not an American Robin…can you tell the difference?

Post-Script: As excited as I was in my own little birding adventure, the BIG news for any birder this year, maybe even decade, was the discovery of a Ross’s Gull in Half Moon Bay, California on Friday. Probably another sign of climate upheaval, this true arctic bird has basically only been seen in Barrow, Alaska in the Fall. Confirmation of multiple Saturday sightings via social media gave me no choice but to alter my air tickets…Southwest is very cooperative…yesterday evening and prepare to leave for SF this morning (Sunday). At 10pm last night I checked the San Mateo rare bird reports again to make sure, I don’t know why, OCD I guess. And discovered both in words and photos that yesterday afternoon the Ross’s Gull was “predated” by a Peregrine Falcon! I am now headed home.

24 Responses to NOT just any Oriole and Robin