The American Birding Association (ABA) finally voted to include our 50th state in its geographic territory in December, 2016. Hence, there has been a recent surge of birders booking trips with the hopes of adding Hawaii’s unique species to their life-lists. Hawaii is viewed as a mini-Galapagos Islands as its isolation allowed a degree of “adaptive radiation” (think Darwin’s finches and the theory of evolution) among the birds, most notably the Honeycreeper family. 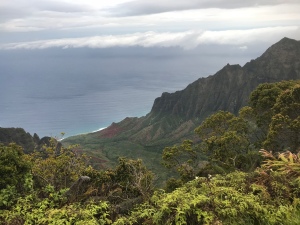 A knee-replacement last summer had kept me on the bird-chasing sidelines the past six months. But a favorable March work schedule, coupled with the blessing of the home-front/medical team, set the table for what was a remarkable three island tour in Hawaii. The key to the entire trip was my guide….Mandy Talpas. She can be located on the internet as “Hawaii Birding Babe”. http://www.HawaiiBirdingBabe.com/
Her boyfriend coined the accurate description of this young, East Stroudsburg/Villanova-educated Pennsylvania-reared birding machine. She possesses a combination of the Professor’s brains and Ginger’s looks (remember the ill-fated three-hour tour popularized on television?). She is tenacious, talented, funny and most importantly, she managed to find me 74 species and 46 LIFERS for the trip. Not once did I beat her to a bird call or a sighting! I’m afraid I was more of a Gilligan-like character following her through rain-forests and 6,000 foot climbs, anxiously waiting for her to locate the next possible rarity. 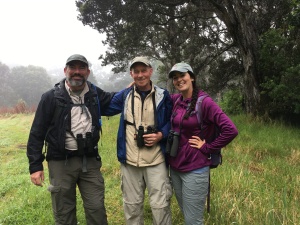 Hawaii is an archipelago with super-rare birds that can only be seen there (i.e. “endemic”). And sadly, due to….yes…Climate-Change…several species will likely become extinct in my lifetime. Why? Because malaria-carrying mosquitoes are moving up the hillsides as temperatures rise and the birds, most of whom never developed an immunity to these diseases, are literally flying out of room seeking lower temperatures at higher altitudes. The lucky ones that seem to have some resistance to avian pox are threatened by introduced ground predation in the form of feral cats, pigs and mongooses. Mandy found 16/17 of the endemic bird species (we missed the Hawaiian Hawk) and ten (10!) of those 16 are listed as endangered by the US Fish & Wildlife Service.

As depressing as the future is for many of Hawaii’s forest birds, other types of introduced birds are thriving.

Red-crested Cardinal
(Introduced from Brazil in the 1930’s)