Swainson’s Warbler in Cape May!

My heart jumped when I read the NJ Rare Bird Alert text on Sunday morning April 29th. The Swainson’s Warbler had eluded me in Florida, two Carolinas…and now it was hundreds of miles north of where it was supposed to be…but only two hours from Philadelphia. By 2pm I was anxiously wandering the footpaths near the Cape May Point lighthouse hoping I had interpreted the e-bird coordinates correctly when I ran into my birding friend Win Shafer. Together we determined exactly where this small (5″) bird had been heard but basically not seen. Unfortunately, after a couple of hours standing in the bird-sound-less wind, we each headed home, very disappointed.

For the next two weeks I jealously read daily reports of birders hearing but rarely seeing this same singing male. This bird must have set up a breeding territory, otherwise it surely would have moved and continued its wayward migration. The Swainson’s Warbler is an olive-brown (i.e. drab) bird with a huge voice. Think Carolina Wren. When not singing from an exposed branch in breeding season, it spends most of its time skulking on the ground, hidden in dense thickets and “foraging on the ground looking for insects, spiders and caterpillars”. This guy  was particularly difficult to locate because it was situated deep in the tangles of private property.

Drab appearance but what a voice!

Monday May 14th I woke up very early and decided to try again. Fueled with WAWA coffee, I cruised to southern NJ and was planted in “the spot in Bob’s Woods” just before dawn. The 3:00 am wake-up was worth it because the bird was already belting out its distinctive song very LOUDLY. It actually wasn’t that close and, of course, it was hidden somewhere in the distant dim-lit stand of trees. I desperately wanted to see it as I don’t “count” heard-only birds on my life-list. I was alone. Should I play the bird’s song on my IPHONE to draw it closer? I thought of the occasional (?) golfer with a bad lie in the rough who moves the ball to ostensibly check its identity and replaces the ball in a better position. That’s called cheating. NO….using the phone would be unethical and kind of cheating. Not to mention it would be very disturbing to this persistent, lonely male who has already been exerting tremendous vocal energy for 15 days to impress (sadly) a non-existent female.

At 6:15 am I noticed a slight silhouetted movement twenty feet up and about 50 yards away. I was rewarded with a 10x binocular-aided visual of this Code 2 wood-warbler! It was singing from a branch in a tree whose leaves had not completely popped out. Eureka! I reached for my camera….oh, right. I didn’t think I had a prayer to photograph this bird so I left the camera and its telephoto lens at home. But I did take an IPHONE shot of the tree it occupied. 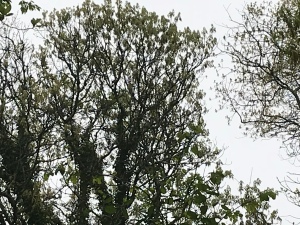 I promise a Swainson’s Warbler is in this tree!

You’ll just have to trust me. ABA Area species #772 and also the last of the 50 (excludes Mexican rarities) warbler species one can see in the Lower 48 states.

10 Responses to Swainson’s Warbler in Cape May!